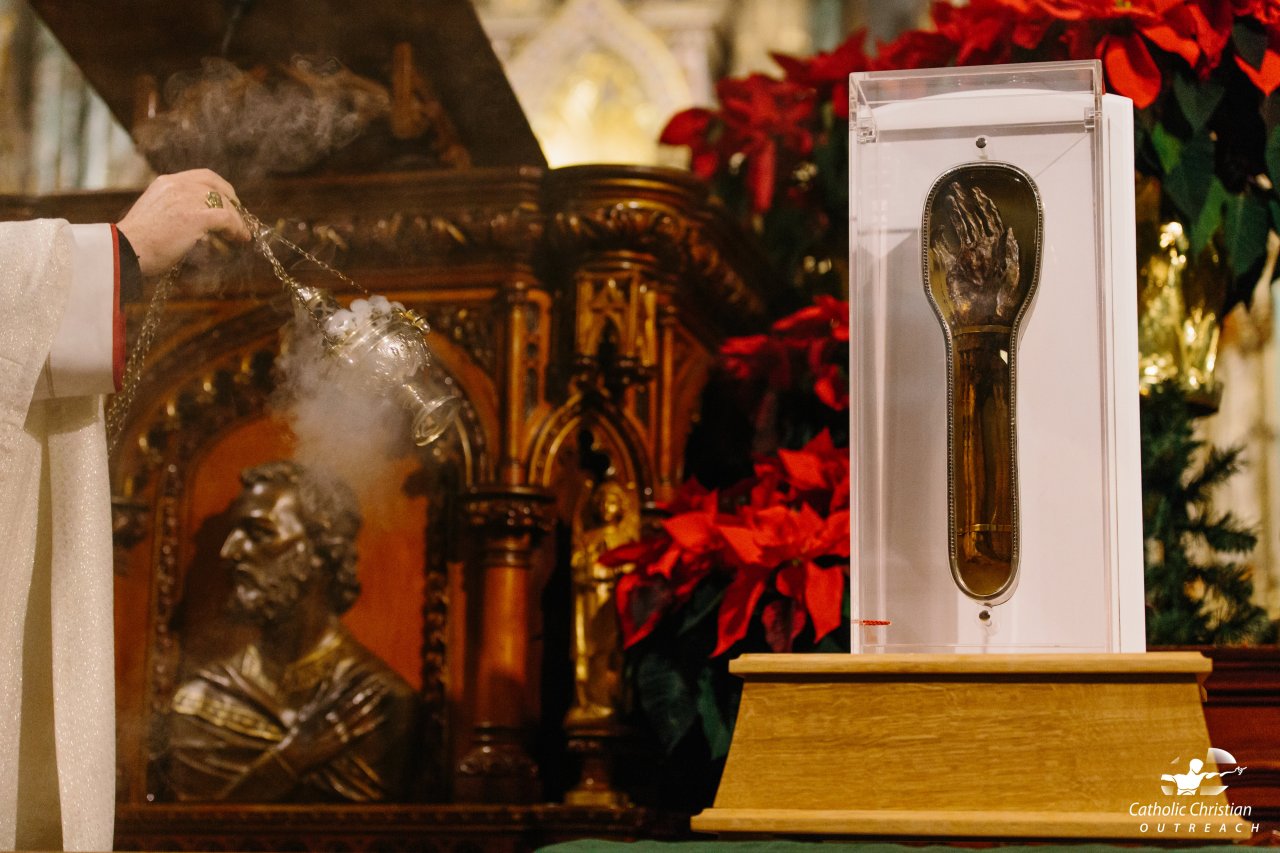 I arrived to Toronto to visit my Protestant friend for the week. She greeted me wishing me a happy new year and asking how I’d spent it.

“Well,” I explained, “At the conference from which I just came, we venerated a relic of St. Francis Xavier’s right arm, the arm with which he baptized 100,000 people.” Her first question was not “Why do Catholics venerate relics?” but rather “So, how did his arm come off?”

I must admit my surprise that this question had not even occurred to me throughout the evening during which I was among the thousand young Catholics from coast to coast venerating the relic, which is now on a cross-Canada pilgrimage.

Participants line up to venerate the relic of St. Francis Xavier at the front of the room. Photography by Laura-Anne Jensen – http://laura-anne.ca

Veneration is an act not of worship or adoration, which, obviously, we reserve for God alone, but of reverence and respect.

After all, as George Weigel put it: “The Church doesn’t canonize saints for their sake. […] No, the Church canonizes saints for our sake, so that we might have models who inspire us to be the holy ones we must be, if we’re to fulfill our Christian and human destiny. […] the Church doesn’t ‘make saints;’ God makes saints, and the task of the Church, through the beatification and canonization process, is to recognize the saints that God has made.”

Deacon Andrew Bennett discussed during the conference that Christians are not “people of the book”, but of a Person. Saints are successful insofar as they have come to proclaim by their lives, along with St. Paul, “It is no longer I who live, but it is Christ who lives in me.”

According to Dietrich von Hildebrand’s assessment in Liturgy and Personality: “In antiquity, we find a deep reverence not only in Socrates and Plato, but also in the ethos of the people. How deep was the consciousness of the unrighteousness which lies in hubris, in that failure of reverence, in that unbridled self-assertion, in that loud and false security!”

Yet, he insists, so many fail to grasp the way in which exemplary lives summon us. We seldom allow ourselves to an encounter that does not merely fill us with admiration but that says to us, ‘this concerns you’. If we are mere spectators and do not undergo the confrontation with the reality that who we are is not yet who we ought to be, then we neglect the true project of our lives.

The structure of our adequate response to saintliness is well expressed by Hildebrand in this passage:

Of course our first response to objects of value [such as the life of a saint] must be an affirmation of them, a joy in their existence as such. But then the true response-to-value raises the question: “And what about me, can I bear what this value conveys to me of God?” This involves the consciousness of one’s own unworthiness and guilt. There are men for whom this last question predominates over all others, so much so that instead of rejoicing in the magnalia Dei, the great deeds of God which are revealed in a saint, they feel despondent, saying to themselves: “How different I am! Shall I ever be like him?” This of course is a false and unhealthy attitude. Likewise incorrect is that other attitude wherein we see only the value in itself, without understanding the word which God speaks to us through it, without hearing God’s call to us which is also contained in it. The right attitude in contemplating a saint is to rejoice first in the magnalia Dei, to experience this joy and gratitude without troubling about what we are ourselves; and then to take into account the word of God which is spoken to us through him, and to say with St. Augustine: “Si isti cur non ego?” (If these, then why not I?).

And this right attitude of reverence is precisely what Catholic Christian Outreach was seeking to cultivate in the thousand young Canadians who had an opportunity to venerate the relic of St. Francis Xavier. We reflected on St. Francis’ life and especially these fragments from his letters to St. Ignatius of Loyola:

Many, many people hereabouts are not becoming Christians for one reason only: there is nobody to make them Christians. Again and again I have thought of going round the universities of Europe, especially Paris, and everywhere crying out like a madman, riveting the attention of those with more learning than charity: ‘What a tragedy: how many souls are being shut out of heaven and falling into hell, thanks to you!’

I wish they would work as hard at this as they do at their books, and so settle their account with God for their learning and the talents entrusted to them.

This thought would certainly stir most of them to meditate on spiritual realities, to listen actively to what God is saying to them. They would forget their own desires, their human affairs, and give themselves over entirely to God’s will and his choice. They would cry out with all their heart: Lord, I am here! What do you want me to do? Send me anywhere you like — even to India.

And we sang together the lyrics of Hillsong’s song “So Will I”:

Participants also prayerfully wrote down commitments and entrusted these to St. Francis Xavier’s intercession by touching them to the case containing the relic. 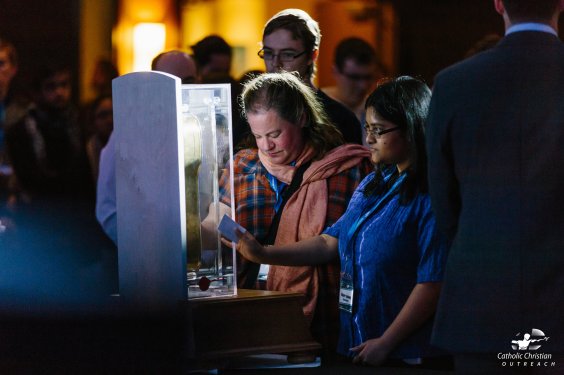 In a chapter titled, “The Spice of Life” from Signs of Life, Scott Hahn says of relics: “[Romans and Jews considered corpses defiling and unclean – death-dealing rather than life-giving] Yet Christians believed in the marvelous exchange. Christ became what we are so that we might become what he is. He came to divinize us, body and soul and flesh and bones and blood. So that bodies of the saints now convey his life to the world.”

Relics really are the spice of life.

Throughout the day, my friend taught me about what Luther took issue with concerning relics and indulgences and I taught her about the life of St. Francis Xavier.

“Wait, so Jesuits actually believe in evangelizing the world?” she asked. “If that’s the case, they might just be my favourite Catholic group.”

P.S. Frédéric Chopin isn’t a saint, but it just makes sense to me that his body is buried in the Père Lachaise cemetery but his heart is buried in his native Poland. Check out that story on Atlas Obscura.

P.P.S. [According to Wikipedia, “The right forearm which Xavier used to bless and baptize his converts, was detached by Jesuit Superior General Claudio Acquaviva in 1614. It has been displayed since in a silver reliquary at the main Jesuit church in Rome, Il Gesù.]